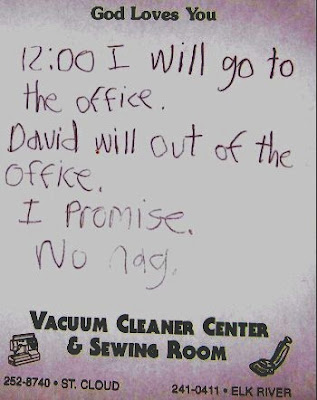 Last week, we did not do much on the official homeschool front. David was working hard with other youth in our area on a spring break mission trip. They spent their days cleaning up yards, building steps and railings, and painting for the poor. When he was not at baseball practice, David spent his evenings relaxing at youth group. He came home exhausted.

With David gone all week, Pamela did not feel the urge to renew the contract about the sacred hour. But, today, I find this waiting for me in the kitchen when I fixed my first cup of coffee. While she did not nag me, she did read the contract aloud to me in my presence five times during the morning! 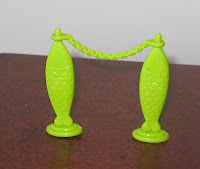 On the RDI front, I filmed Pamela exploring a novel object found in her locked box at the end of the treasure hunt activity. I stored three pieces from a Barbie Dream Kitty Condo I secretly bought at Wal-Mart last night. Pamela unlocked the box and handled two plastic green fish and a plastic green rope that form a stand as you can see in the picture. She figured out how to assemble the pieces without any clues and hints from me. She has not studied the toy on previous shopping trips because she had no idea of its connection to Barbie's kitten. She guessed correctly that the pieces are part of a Barbie toy. She missed the mark in that she thought the parts are part of a trap or jail, but all things considered Pamela did well!

Next Episode of Barbie Kitty Condo Project
Posted by walking at 12:11

Boy, Tammy, I can sure relate to "no nag" but reading it to you five times during the morning. That would be Alan's exact idea of not nagging. It is acceptable to remind, right? Mary

I am trying to ease her out of the nagging. I read the paper out loud, once in her presence. Then whenever she wants to read it aloud to me, I remind her that I already made my promise and I ask her to read it to herself in her room. I have no idea how many times she reads it to herself!

TAMMY, DID PAMELA USE YOU OR YOUR FACE AS A REFERENCE FOR THESE NOVEL OBJECTS OR DID SHE JUST EXPLORE THEM ON HER OWN?

I am trying to scaffold this because, at first, she had no interest in anticipating what might be in the box next.

At first, I wanted her to see a pattern (three days in a row of predictable items). The first time I spotlighted anticipating the future, she left the room and spent more time asking about speech therapy, not what might be in the locked box the next day. By the fourth day, she stayed with me in conversation and referenced my face. So, it took five days before she was ready to enjoy referencing my face for information to guess the animal and color.