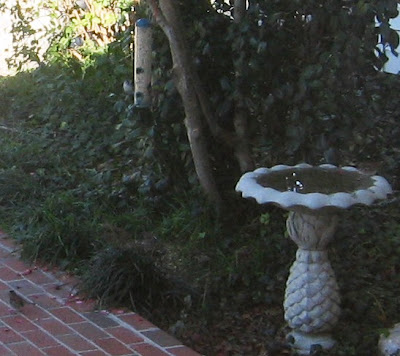 You must be living in another hemisphere if you have no idea of the extreme cold everyone is facing right now! This morning Steve noticed the bird bath had turned into a skating rink. He heard the little chipping sparrows going "tink tink" as they tried to break through the ice. He heated up some water and a few minutes later noticed how much they appreciated his kindness.

Later in the morning, I filled the bath with hot water twice, and God rewarded me in such a delightful way. I gazed out the kitchen door window and spied something I had never seen before: a gorgeous blue bird with a robust red breast with a glorious green and yellow splash behind its neck. I flew to my Carolina bird book and discovered it was the very reclusive painted bunting. People introduced them to America as caged pets, and those released adapted well. Their numbers have declined since 1965 due to the trapping business in Mexico.

My neighbor who has lived here all her life has never seen a bunting and according to the range map, we are not in the zone for a wintering bunting. Even the colorful male buntings are hard to spot because they prefer to hide in thickets, and you are lucky to pick out its song. The poor guy must have been desparate for food and water to expose himself like that! 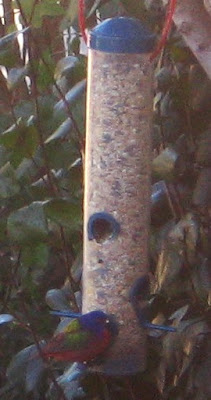 I grabbed the camera and took a couple of photos through the window to prove that I really did see a painted bunting. I yelled up the stairs so excitedly that David thought he was in trouble! Both kids came to the door and were amazed. We called Steve, and Pamela excitedly told him, "It's so beautiful. I see a colorful bird!" After we hung up the phone, I tried to get a couple of pictures from the porch, sneaking through a hidden door to the back porch, but the shy bunting skittered off before I could do anything. I even saw its reflection from the dining room window but was not quick enough to snap a shot.

I was determined to capture some video, so I put my handicam on the back porch, started recording, and took a shower. And, yes, while you might have a hard time seeing it, the bird enjoying our birdseed is, indeed, a painted bunting! I went through all thirty minutes of my recording and what follows are the highlights of our little flock, mostly old familiar friends, feeding on the coldest day of the year . . . so far!

Male Painted Bunting
Mr. Bunting shows up below the feeder about 20 seconds into the clip. A few seconds later, he lands on the feeder. You mainly see his red chest and blue head. When he turns to the left, you can see a bit of green on the back of his neck. He is eating up millet seed with gusto! (On my computer, I put the video on full screen so I could make out the colors, albeit blurry.)


Male Painted Bunting and a Loud Thwack
I ended up with a total of four minutes showing the bunting eating. In this video, he shifts to the other side, and you can see the green on the back of his head. The wind picks up and startles him. He flies off and that loud thwack is him hitting the siding of our house! He did fly away, so I hope he is okay now!


If you think that this was plenty of excitement for one day, then you are dead wrong! The cold weather must bring out extremely desparate behavior in birds, and my next post is even more shocking!
Posted by walking at 20:20

What a gorgeous little bird! And what a blessing that God brought the reclusive little fellow right to your house. I'm sure the birds are all putting your house on the map since you are kind enough to thaw out the water in the bird bath for them!

you said you were wanting a birdbath..is that new?

so..does the painted bunting make you wanna move here? (Okay- i've never seen one...but then again I am lax on the putting the feed in the feeder...why??? because it's COLD!)

Sounds like your windows are too clean! LOL I got to see a baltimore oriole for the first time this year when one visited my grape vines. he he

Tammy, I would love to spot a painted bunting. I had a lovely blue
bunting here one summer and I enjoyed him so much. I also just love Cardinals!